A SCHOOL DISTRICT IN NORTHERN GEORGIA DEPLOYS AN INCIDENTREPORTING TOOL THAT ENHANCES SITUATIONAL AWARENESS FOR TEACHERS AND FIRST RESPONDERS. BY HOLLY GILBERT STOWELL

A PENNY CAN GO A LONG WAY. This concept that many small contributions add up to a big sum was the inspiration for a one-cent sales tax in Georgia, known as the Education Special Purpose Local Option Sales Tax (ESPLOST).

The public funding eff ort has helped further an environment of safety and security at local schools, says Mike Sholl, director of operations for the Catoosa County Public Schools. Catoosa County Public Schools, made up of 17 elementary, middle, and high schools, plus a performance learning center, is currently in the fi ft h phase of the ESPLOST funding. Sholl explains that community members were polled on how they would like to see the public education dollars spent.

“We have townhall meetings and we do surveys, and the number one priority for parents is the safety of our schools,” he tells Security Management. “So when we started ESPLOSTV, that led us to implement all the safety initiatives we have.” Those initiatives include collaborating with local law enforcement to prepare for emergency response, and a variety of technological solutions to support security.

“We have door buzzing systems, we’ve added cameras to our schools, so we’ve spent a lot of time and money on making our schools as safe as we possibly can,” Sholl says. The local sheriff ’s offi ce works closely with the district. There are plans to add live monitoring capabilities for police, allowing them to view events as they happen via campus cameras and provide dispatch. In addition, the district employs several school resource offi cers who either work full-time on a campus or divide their time among the schools.

Among Catoosa County’s top concerns is the possibility of an active assailant situation at its schools. It wanted to be able to quickly notify law enforcement and provide teachers and students with the ability to quickly react, all while following policies and procedures. The district knew investing in this type of solution would aid in all types of hazardous situations, including medical emergencies, natural disasters, and other incidents.

At a regional school safety conference in 2015, Catoosa discovered SIELOX CLASS (crisis lockdown alert status system), a daily incident and crisis reporting tool. The district chose Tiger Creek Elementary, one of its 10 elementary schools, as its test case for the product, and installed it in early 2016.

SIELOX CLASS operates via a Web or mobile interface that provides teachers or administrators with several customized options for sending diff erent alerts, so it can be pulled up on any mobile device or computer. A dashboard with customized alerts allows teachers and administrators to perform a variety of tasks. Colored buttons make it easy to distinguish what type of incident is being reported, from a medical alert for the nurse’s office to a 911 call in a lifethreatening situation.

With a panic button on the app, any teacher can initiate a lockdown at the school.

“Our playgrounds are a good distance away from the school building. So—say a child gets injured on the playground, and could break a leg or an arm or hit his head or her head—that teacher can initiate the blue med-ical alert and get someone on the way out there,” Sholl notes. Teachers use CLASS daily for their morning check-in to let administrators know that they and their students are in the building. In the event of an incident, a chat box will pop up for all CLASS users where communication can take place.

“An important part of bringing in SIELOX was communication, and the ability to check-in,” says David Beard, principal at Tiger Creek. “Each of the
individual classrooms is represented by a different color and a different square, and we know the status of those rooms based on the color system that SIELOX uses.” CLASS also gives first responders and administrators a clear picture of where students and teachers are at any given moment. “If teachers leave the building or take students off campus, they will use SIELOX CLASS to let us know that they are no longer on the premises,” says Braden Moreland, assistant princi-pal at Ringgold Elementary, adding that it would help responders to know that they are not on campus in the event of an emergency. 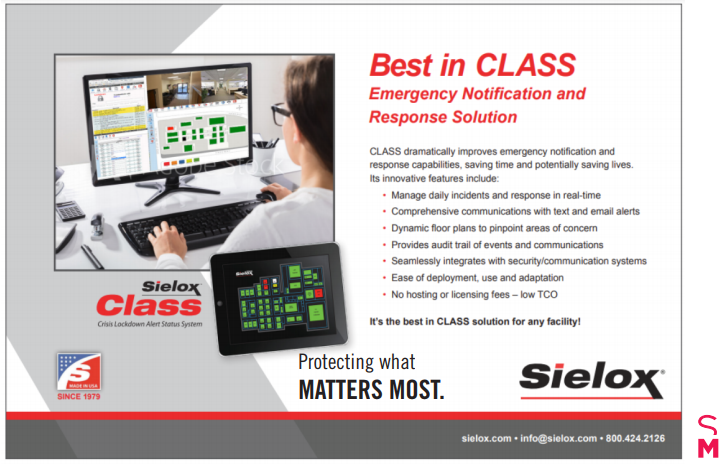 The district also tied SIELOX CLASS to its cameras throughout the building, setting up an alert that would notify users of motion detection in a lockdown situation. “We decided that we would like to use CLASS to detect motion in the building, so that if we did go into a hard lockdown there would be no traffic in the halls,” Beard says. “If everybody else is locked down and out of the building, the sheriff’s office has a good idea of where that perpetrator would be.”

The district regularly conducts drills for all types of hazardous scenarios, including its dangerous situation protocol, known as “Run, Hide, Survive.” With a panic button on the app, any teacher can initiate a lockdown at the school. For enhanced situational awareness, the district incorporated camera views into the lockdown feature of CLASS.

“The teacher gets the popup that says ‘lockdown’ and gets a bullet list of instructions on what to do, as well as two camera views of the hallway outside their classroom,” Beard explains. “So, if he or she wants to do the run part of Run, Hide, Survive, he or she can see if there’s any danger outside the doorway, and then make that decision to run withthe children. So that’s another layer we’ve added with SIELOX, and it works very well.” 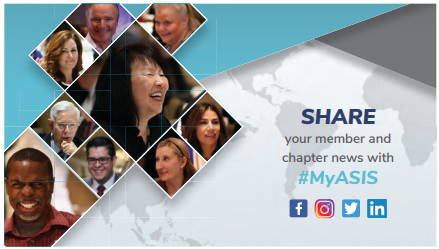 The district notes that, thankfully, no lockdown procedure has ever been necessary outside of a drill. However, an accidental activation of the lockdown feature by a receptionist at an elementary school proved the value of the product. “She was trying to log out and she accidentally hit the lockdown icon, and of course I immediately received a text and I was on the phone calling the principal,” Sholl says. “He went and found out that it was a false alarm, and within two minutes, the sheriff ’s deputy had pulled into the campus,
because he had been notified and dispatched to that school.” The district plans to have SIELOX CLASS deployed at all 17 schools by the end of the 2017–2018 school year.

“CLASS provides a very quick response and gets the word out very quickly to lots of people,” Sholl says. “The accidental lockdown just proved to us that it’s very effi cient and works how we want it to work.”

About the Author: Admin